The Atascadero branch of AAUW was chartered in November 1937.  It was the first branch in SLO County. It from that sense of history in the community, that we draw each year as we involve ourselves Atascadero’s annual celebration of Colony Days. As suffragettes at Tent City to marchers in the annual Colony Days parade, AAUW Atascadero has actively participated, often times winning awards and recognition not only for our performance but our involvement in the community as well. 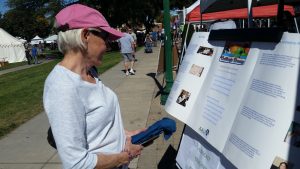 This year’s theme was “California Dreams.”  Atascadero AAUW sponsored a booth with the theme of “California Dreams for Women.”  We highlighted AAUW’s mission of equity for women and girls and gave out information about membership in AAUW and applying for college scholarships. 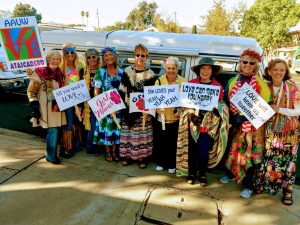 The theme of the 2015 Colony Days Parade was ‘Volunteers on Parade.”  We represented ourselves as the organization that is ALL HEART by wearing white clothing with red felt hearts sewn on. 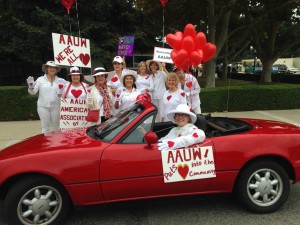 A group of Branch Members walked in the 2013 Colony Days Parade – the Centennial of the founding of Atascadero – on Saturday, October 19th. The photo below shows our walkers waiting for their spot in the Parade! 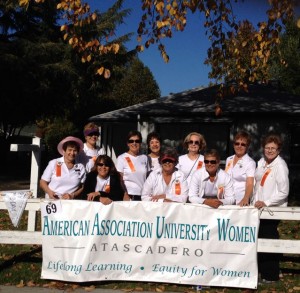 AAUW wins  2012 Colony Days parade entry for
Best Representation of the Theme:  Back to the Future.

What a statement AAUW made on Saturday, October 16, 2012 in the Colony Days Parade!

Dressed as famous women from the past, present, and future, equity for women was the message loud and clear.  Thanks to the following women, girls, and young children who represented successful women through the ages who have fought for women’s rights: 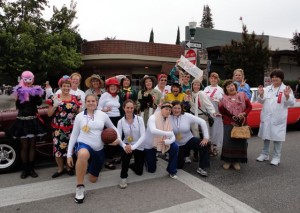 Our young mother was Candace Hubbard as Astronomer Henrietta Leavitt with her young daughter Valerie as the 1st Inhabitant of Mars.  Our two women drivers were Marilyn Hamilton in a beautiful 1929 Roadster and Diane O’Neil in a drop-dead orange 1957 Chrysler.

Many thanks to all you who participated and gave AAUW another voice in the community.